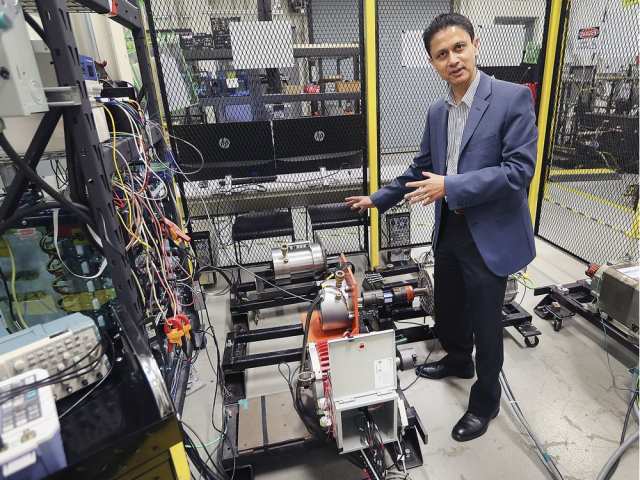 Tucked into a corner of the University of Windsor’s engineering building is a lab crammed with equipment, electric motors and ideas, where the future of an industry and a new segment of southwestern Ontario’s economy is being explored.

The electrification of the auto industry is the closest thing we’ll see to a new industrial revolution and the university’s Centre for Hybrid Automotive Research and Green Energy (CHARGE) is helping place Windsor in the middle of the action.

“The auto industry is the biggest industry in the world and it’s up for grabs,” said Dr. Narayan Kar, who heads the CHARGE lab and is Canada’s first Canada Research Chair in Electrified Engineering Systems.

“We see great opportunity here because, as of now, there’s no clear winner. We don’t want to be left behind.”

Kar said about 85 million new cars are purchased annually around the world. He predicts in 10 years about half of those will be electric or hybrid electrics.

“We (in Southern Ontario) have been in automotive manufacturing for over a 100 years, so we can make this stuff,” Kar said.

“That’s why almost everything that needs producing, we have done locally. Somebody is going to produce it somewhere in the future and we want it to be done here.

“The question is are industry, academia and government doing what needs to be done to be ready for this shift to electric?”

Kar, a professor of engineering at Windsor since 2003, has assembled a team of 30 researchers. He’s drawn experts from universities across Canada in multiple disciplines.

The university is currently looking to add two more people as Canada Research Chairs in electric/autonomous vehicles and connected vehicles.

“I feel Windsor is already the premier automotive research university in the country and adding these two positions will only solidify that,” Kar said.

The automotive industry and government has literally bought into that opinion by wearing a steady path to Kar’s door.

In the past five years, the CHARGE lab has attracted nearly $7 million for research.

Kar has built longstanding industry partnerships with Ford Motor, D&V Electronics, Magna International and BorgWarner, and has seen increasing interest from around the globe as the push towards electrification accelerates.

In addition to funds, companies are providing materials or producing complete engines for experimentation.

“We’ve been in talks in recent weeks about a project that would be worth more than $1 million,” Kar said.

“I’ve got three or four meetings with different companies next week. We meet twice a week with Magna.”

In addition, groups from China and India are scheduled to visit the CHARGE lab next month during the Automotive Parts Manufacturers Association conference in Windsor.

With so many American companies interested in his work, Kar said he’s now in a position to apply for research grants from the U.S. federal Department of Energy.

“They have a lot more money available for this type of research,” Kar said.

While proprietary issues prevent Kar from sharing specifics about the lab’s work, his team has developed an expertise in working with different materials for use in electric motors, power controls and drive systems.

“We have to overcome the challenges of size, weight, cost, reliability, efficiency and thermal manageability.”

To meet those challenges, the CHARGE lab is filled with computers and equipment capable of testing engines under a variety of conditions using different types of power sources.

“In the next 10 years electric cars will be comparable or less than gas-powered cars,” Kar said. “Then you’ll see the shift.

“The fact that companies are coming to us increasing numbers, tells us we’re doing something right.”